Rebecca, the blogger behind Cheering On Charlie (which you can find in our resources section of the site) invited us to repost her prematurity story (which will appear in two parts) on our blog. It originally appeared here.

A few years into our marriage, my husband started a new job. It seemed like everyone at his office was having a baby. That was how he caught baby fever.

One evening, he asked me about wanting a baby. I took a deep breath as I prepared to rattle down my standard list of reasons why I did not think I should be a parent. However, things had changed over the past few years. I no longer had a list of anti baby reasons. In fact, I could not think of one good reason. We decided that maybe babies were in our future. We decided to try.

Because I had written off having babies as something for other people, I never really paid attention to the topic of pregnancy. It was completely off of my radar. Whenever a pregnancy show came on TV, I’d change the channel. I had not read anything about pregnancy or child birth. At that point, the only thing I knew about babies was how not to have one.

To educate myself, I bought the Mayo Clinic book on pregnancy. It became my instruction manual. I followed all the advice and suggestions within its pages. I took prenatal vitamins with folic acid, had a physical exam, and talked to a doctor before I attempted to get pregnant.

It took about six months for me to get pregnant. There were plenty of negative pregnancy tests. From the beginning, things were complicated. I discovered I was a few weeks pregnant a day after I had herniated a disc. We thought my back issues were going to be our biggest obstacle.

My husband and I followed my pregnancy in the book week by week. We liked to learn how much our baby had grown and developed. I remember the week that we read our baby was the size of a grape. I very distinctly remember reading the line, “Preeclampsia occurs in about 6-8% of pregnancies.” I flipped past that section and thought, there is no way it can happen to me. I was sure things would be fine because we followed all the rules and instructions.

I kept up with the prenatal appointments religiously. The nurses at the office thought it was sweet my husband attended each one with me. I followed all of the doctor’s suggestions. However, there was always something “not quite right” with my pregnancy. There were a few odd vitals or lab results. As a precaution, I was tested for pregnancy complications such as gestational diabetes.

At twenty weeks, I started seeing spots occasionally and my blood pressure started to climb. My OB/GYN was slightly concerned. However, my symptoms were ambiguous. There are many changes in the body during pregnancy. Those symptoms could have been just one of those changes. To be safe, I started having more frequent appointments.

That same week, I had my 20 week ultrasound. Everything appeared normal. But, Charlie was breech and the tech could not see her spine. I was reassured that everything was normal and instructed to return in two weeks so that her spine could be documented.

At twenty two weeks, my husband and I returned for the follow up ultrasound. Charlie remained in the breech postion and would not turn. We laughed about how stubborn she was. To make her point, she kicked back when a doctor tried to get her to turn. We laughed as we were scheduled to return in two weeks.

I was at twenty four weeks during my last prenatal appointment. It was early May. I was out of breath and sweating profusely. I felt miserable. My blood pressure had climbed even higher. After the exam, my doctor called my husband and me back into his office. He mentioned preeclampsia as a possibility. My husband and I kind of shrugged it off. We thought that there was no way that could happen to us. We told ourselves that it was just another scare. We did everything by the book so everything was going to be fine. We hurried off from that appointment to the third ultrasound.

The ultrasound was supposed to take a couple of minutes. They just needed to see her spine. My husband joked with me about our baby while I lay on the table while the tech worked. We waited to hear that everything was fine and I could get dressed. Instead, the tech asked if I had been losing fluid. She started taking measurements.

A short ultrasound turned into a lengthy ordeal. Our jovial demeanor quickly changed. I became more nervous with each question she asked. She left the room several times to consult with the doctor. I was confused. What was going on?

As the ultrasound concluded, the tech instructed me to get dressed and wait for the perinatalogist. It was the first time that we had formally met the perinatalogist (she had tried to turn Charlie at the previous ultrasound). She explained asymetrical IUGR (growth restriction) and oligohydraminos (low amniotic fluid). I knew that it was not good news. However, I was not sure exactly what it meant. She sent us home with directions to have pretty extensive lab work performed over the next couple days.

That evening we had live jazz dinner plans with some friends. My husband wanted to cancel. I insisted that we go. I wanted one last fun night with my baby. Something in me knew that it was my last free night of pregnancy. I wanted to have a special night with Charlie. I fed her a good meal, surrounded her with the love of good friends, and let her hear live jazz. It was the only thing that I knew to do for her.

After we returned home from our night out, I started getting a headache. I assumed it was from stress and worry. It intensified over the course of the next day. There was nothing that helped it. In addition to the headache, I had horrible indigestion that did not respond to treatment. The day after the last ultrasound, I was supposed to have finished up blood work and turned in my 24 hour sample. Instead, I found myself in the emergency room.

The doctor on call explained that I had preeclampsia. He continued on to say that I may have to deliver that day if my blood work indicated it. I sobbed. I had never heard of babies being born at 24 weeks. How could this have spiraled out of control so quickly?

Fortunately, I did not have to deliver that day. I was admitted to the high risk perinatal unit. I received a series of beta methasone injections to help develop Charlie’s lungs. The perinatalogist explained that the goal was to keep me pregnant until thirty two weeks. I was ordered strict bed rest in the hospital in order to reach that goal. I was not going home until I had my baby.

Every other day, a blood sample was taken. On the days that blood was not taken, an ultrasound was performed. The medical team watched as the preeclampsia increased in severity. During which, there was a battle with my insurance. My insurance held the opinion that I should be monitored on an out patient basis (an impossible task). The battle ended when my kidneys started to fail very quickly.

It was on Memorial Day that my OB/GYN walked into my room and announced, “If it is up to me, we deliver today. I still have to consult with the perinatalogist. I am no longer comfortable continuing this pregnancy.” The perinatalogist decided it would be best to wait one more day. Charlie would reach 26 weeks gestation. Her survival odds increased quite a bit that day.

The morning that Charlie turned 26 weeks, the ultrasound had indicated reversed diastolic flow in the umbilical cord (more was coming out of Charlie than was going in). I had developed HELLP.

Due to preexisting conditions with my spine, the anesthesiologist was unable to successfully start an epidural. She tried five or six excruciating times. The lidocaine was ineffective and I felt each attempt. I was scared for my baby, felt like I failed because the epidural would not work, and swore that I was being tortured. There was not enough time to continue trying. It was decided that general anesthesia had to be used.

I missed Charlie’s birth. She weighed 790 g (a little under one pound twelve ounces). My husband got to walk with her isolette as she was transported down to the NICU. He said, to everyone’s surprise, she screamed the entire way. 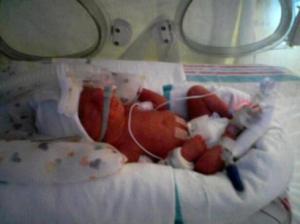 Afterwards, I was under observation as I received magnesium sulfate. I was confused and delirious. My husband took a picture of Charlie shortly after her birth and showed it to me. That was how I saw Charlie for the first time.

The one thing I do remember is from the evening of her birth. My husband and I discussed Charlie’s birth announcement. We were unsure what to do. We were afraid how we would feel if she did not survive and worried about how painful it would be to answer questions. We came to the conclusion that Charlie deserved to be loved and celebrated no matter how long she was here with us. Her arrival was announced the same way as it would have been if she would have made it to her full term.

I was not well enough to visit her in the NICU until two days later.

Stay tuned for Pt. II of this edition of Prematurity Experiences on Tuesday of next week. If you’d like to share your journey with us on our blog, please email your story in a Word doc and one or more pictures to christa@grahamsfoundation.org.