For Prematurity Awareness Month, we are continuing our series Prematurity Voices, where we give parents of preemies a place to share their story in their own words. Today, Nicole tells the story of the birth of her 500 grams miracle, Alexis Lily. 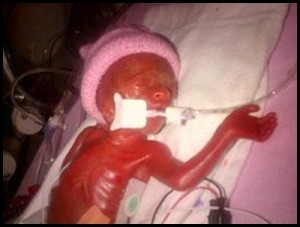 After the loss of a pregnancy in December of 2011, we were very happy and surprised to find out that we were expecting. At the time, my husband was away working in another province so my 3 year old son and I decided we would surprise daddy when he came home for a quick visit! When we met him at the airport my son was wearing a t-shirt that said “I MISSED YOU DADDY, GUESS WHAT” on the front and on the back it said ” I’M GOING TO BE A BIG BROTHER”. Needless to say, he was very surprised! Unfortunately due to an injury, his three month work trip went on for over five months, and he didn’t make it home until the end of October 2012.

I hadn’t been feeling well, but I chalked it up to the fact that I was home by myself taking care of a 3-year-old, 2 dogs, the household chores, and maintenance while also working full time. My doctor had said he could take me off work at any time but with October/November being the busiest months at my job I said I would try to stick it out a little bit longer. 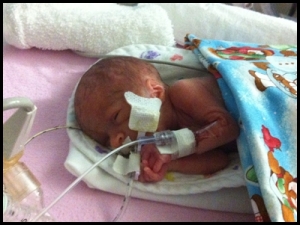 On the 22nd of November, I was on my lunch break and decided to use a portable blood pressure tester to see how mine was because I was feeling a little puffy. The monitor read 168/98 and on the advice of my doctor, I headed to the hospital. After being given IV fluids, I was sent home for a few days to chart my blood pressure. It continued to slowly rise.

On November 26th, at 25 weeks into my pregnancy, I was admitted to the hospital for what I thought was going to be my home for the next 3.5 months. I was put on labatelol to keep my blood pressure down and also given a 24-hour urine test. I had blood drawn frequently. They also did ultrasounds and informed me that my baby was measuring more than 3 weeks behind and had severe IUGR. I was given 2 rounds of steroids injections but was told that it was just a precautionary measure. 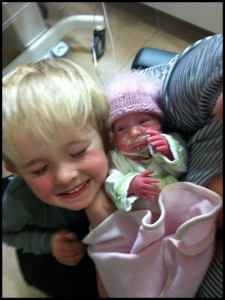 By Thursday night I was feeling nauseous and having pain in my right shoulder and chest area. I honestly wanted to believe it was the McDonalds my father-in-law had brought me to eat that night. On Friday morning I was told to contact my husband and mom. They would be putting me on 4 hours of magnesium and then expected to take me in for a c-section. The original plan was for me to stay awake, but once again things did not go as intended.

Two hours into my magnesium I was told they needed to deliver the baby ASAP as my condition was deteriorating. I had developed severe HELLP syndrome and the only way to save myself and my baby was an immediate emergency c-section. For someone who had never even had stitches, this was extremely terrifying!

My daughter came into this world on November 30th, 2012, weighing just 500 grams (1lb 2oz) and was 29cm long. She was intubated at 7 minutes of life. The next days went by in a blur due to the magnesium and the morphine I was taking for the pain. I know I was wheeled through to see my tiny daughter but barely remember.

Alexis Lily (Lexi) spent the next 109 days in the NICU. She battled CLD, pneumonia, suspected sepsis, Stage 2 ROP, multiple infections, reflux, anemia and pulmonary hypertension, to name just a few of the challenges she faced. But on March 19th, 2013, 10 days after her due date, we finally got to bring our precious miracle home. By then Lexi weighed 7 lb 11 oz and was oxygen and monitor free!

Things were amazing at home, but always stressful. The fear of having to return to the hospital was and is always in the back of my mind – so much so that I sometimes forget to enjoy what is right in front of me.

Today Lexi is over 16 lbs! She is crawling, standing, sitting and loves to push her little table around the house “walking”. She spent her first 6 months at home on a “haberman” bottle from the NICU with expressed breast milk. Her therapists were worried she might have oral aversions and problems eating but I am happy to say that she loves to eat – especially what we are eating – and at 10 months she finally had enough sucking strength to graduate to a proper bottle. No more $20 nipples! She is still on EMB and gaining weight each day. 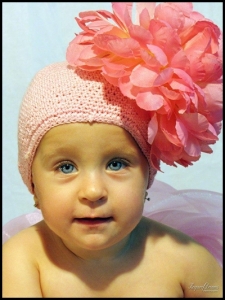 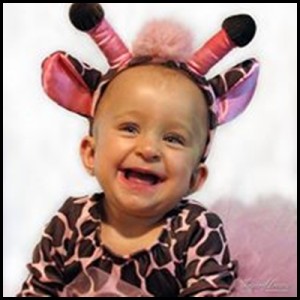 I am still struggling with PTSD, but find it very helpful to share my daughter’s story so I can hopefully inspire other parents of itty bitty preemies. Miracles happen every day… my little Lexi is living proof!

You can see a video of Lexi’s NICU journey here:

“Don’t give up, I believe in you all,
a person’s a person, no matter how small”
~Dr.Seuss