The present and future 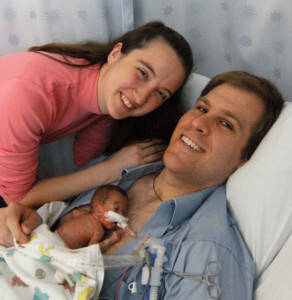 I sit in a room with seven babies who require intense attention, one of whom is my son. At times, this feels like a very long family car trip because there isn’t much to do but sit and watch. But unlike a car trip, there is no crying, singing, or playing. These babies are all silent.

My son is next to me in a spaceship-like enclosed crib that provides a humid environment. He has a breathing tube puffing oxygen of varying concentrations down his throat. Monitors above the crib, or isolette, as it’s called here, show his vital signs — his heart rate, his breathing rate, his oxygen saturation levels and his blood pressure. I find myself continuously staring at these monitors rather than at my son, treating them like a horse race we have to keep up with.

This is the neonatal intensive care unit, in which babies grow after a premature birth. Our son, Gabriel, was born at 22 weeks and 6 days of gestation, which will make him the most premature baby to come out of this hospital’s NICU alive — and it’s the busiest NICU in the state.

I find my thoughts continually wandering away from the present, going to the far future. One religious book I read sometimes while I’m here is called Bread & Water, Wine & Oil, talks about the difference between the heart and the mind, and the author, Father Meletios Webber, points out that the mind really dislikes the present moment because it is unshaped, unknowable, and unmeasurable — how long is “now”?

Here in the NICU, staring at my son, or the machines that keep him alive, time seems to hold still. I’ve got huge amounts of the present moment available, but I don’t want it. I wonder whether he can grow up to be like my grandfather, who died at 94 three years ago. I wonder if Gabriel’s isolette is a time machine, and it is, in a way, since it allows us to watch a period of time parents shouldn’t get to see — that is, the third trimester. Time travel, in science fiction, often uses a plot device of someone changing the past with catastrophic effects. Will we make a mistake, and cause “future Gabriel” to switch from being an engineer, like my grandfather, to being a severely disabled person?

One day, I come in to find the neighbor baby, Brooklin, who was born at 28 weeks of gestation, has an oscillator by her bed. The oscillator is the one breathing device that Gabriel never uses during his time in the NICU, and it’s a rumbling, intimidating presence, like an idling diesel truck. There are two specialists in masks and gloves doing something that produces a sizable quantity of bloody gauze. Brooklin’s mother sits about 18 inches away from me, continually staring at her daughter. She looks like she’s about 10 years younger than my wife and I are. It’s clear she hasn’t slept much lately. She has beautiful, blonde, styled hair, which seems like an artifact of her previous life she brought along. She doesn’t look afraid as the procedure is done on her daughter, rather, she looks like she doesn’t have much fear left to give.

I don’t say anything. I retreat in to a book, but I don’t really read. Rather, I entertain more fantasies — that my son will start playing with the other babies, or that angels visit his isolette, putting on little puppet shows that only they know about. I think about introducing myself, or saying something encouraging, but it feels it would be like an invasion of privacy even though I’m already right next to her. (I don’t want to leave my child, even though he’s completely silent and I’m not supposed to touch him right now.) Maybe, I think, we’ll talk when our children can cry.

Time does not stay still forever. Our children grow. Gabriel graduates from the ventilator after five weeks and makes his first tiny squeak. Miri and I do eventually talk with Brooklin’s parents in the little eating area set up for parents. Brooklin goes home before him – even though he’s a month older than she, her higher gestational maturity makes her hospital stay shorter.

Eventually Gabriel is discharged and goes through an assortment of early intervention therapies to help him catch up. His third birthday comes along, Brooklin and another NICU classmate come to the playground where we’re holding it. Brooklin’s mom has gone to a redder hair color and looks as well-rested as a toddler parent can look. Our children take off like shots for the slides and the swings and play together, as I sniff back a few tears over the seeming impossibility of it all. The present catches up to our future, and my prayer is answered.

Thomas Eric Ruthford is the father of one child, Gabriel, who was born at 22 weeks and 6 days of gestation, setting a record for most immature survivor to come out of his NICU, the busiest one in the state. Thomas and his wife, Miri, live in Washington state. Thomas was a newspaper reporter in the late 90s, and is now a non-profit manager. He has also served in the U.S. Peace Corps in Ukraine, teaching English as a foreign language. He is working on a book about Gabriel, and how neonatal care developed. You can find him on Twitter @MicroPreemieDad, or his personal blog.