A Q&A with Rohan Haggart, Author of Preemie the Explorer 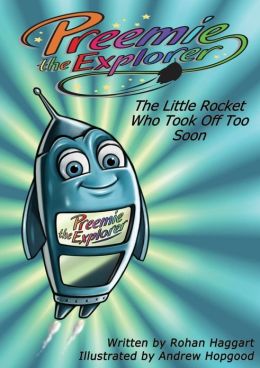 Preemie the Explorer is a one of a kind children’s book that deals with something all children, but especially many children who were born prematurely, will at some point face: being different and confronting social challenges.

It’s a book featuring themes that will resonate with almost all families, but many elements of the story provide a jumping off point for a family discussion about prematurity, caring for preemies, and even some of the medical issues a preemie can face.

We talked to the author of Preemie the Explorer, Rohan Haggart, to find out what inspired him to write such an engaging story and to tackle prematurity in a whole new way.

How familiar were you with prematurity and the NICU before you began writing?

I am a parent, but I didn’t really understand much about the ramifications of preterm birth and the NICU before discussions with my friend Dr. Carly Molloy. Carly and I studied psychology at university together and she now works as a neuropsychologist with preemie kids.

While discussing her work over lunch, Carly mentioned that professional support for preemie children tends to diminish as the child gets older despite the common incidence of ongoing developmental issues.

We discussed various challenges which are typical for preemie children at pre-school and school age and I decided to write a series of books which could help children learn about how to deal with these issues from an emotionally removed standpoint by creating a little spaceship who would face and overcome challenges similar to the ones they were experiencing. My intention was that children would engage with the characters, get lost in the storyline, and not even realize they were learning important lessons which would help them physically and emotionally. There is a page on Preemie’s website, www.preemietheexplorer.com, which further outlines the process by which Preemie the Explorer was conceived and born.

How do you see moms and dads using your book to help their children understand either their own premature beginnings or that of a preemie sibling?

The main focus of “Preemie the Explorer: The Little Rocket Who Took Off Too Soon,” is to help children find a reason to be proud of themselves, especially children who may find themselves feeling different and/or alienated from their peers. The message that everyone possesses strengths which make them special, even if they haven’t found them yet, is empowering to the individual but also useful for siblings who may not have recognized that their brother or sister, who may be challenged in some obvious way(s), can still have talents and skills that make them awesome.

Two more books are planned for the series and will incorporate specific developmental issues which Preemie will have to overcome in order to achieve his goals. For example, in book two, “Preemie’s Return to Mama,” Preemie encounters learning and memory problems (because his computers haven’t been fully connected) while trying to find his way back to “Mama Spacecraft” on earth where he was built. Preemie is taught strategies (e.g., mnemonics) to overcome these problems from a new character, a space station called “Anima.” In this way, children can learn vicariously, through Preemie’s adventures, how to deal with such challenges that they, themselves, or their siblings, may be facing.

For the first book, I felt the social aspects which involved children feeling different and isolated, and the bullying which may result, was the most pressing issue because a child with a healthy self esteem is much better equipped to tackle physical or mental challenges more effectively.

For siblings of a new preemie, I hope that “Preemie the Explorer: The Little Rocket Who Took Off Too Soon,” will give them a fun, exciting story which includes elements they can identify. Preemie’s premature take-off, the NICU, and kangaroo care will all be recognizable concepts and terms and may help them further appreciate and understand what is going on with their family.

Is Preemie the Explorer just for families with preemies?

There are metaphors and references in “Preemie the Explorer” which relate specifically to pre-term birth, however its over-riding themes and messages about believing in oneself by focusing on strengths instead of weaknesses, facing challenges with enthusiasm, and being kind and forgiving make the book accessible to every child. I like the idea that in addition to Preemie children and their families reading the book, non-preemie children and parents who read the book because of an interest in space ships or perhaps bullying, might also gain some understanding and insights about preemies.

There aren’t many books that address prematurity in this way. What has the response to the book been like among parents of preemies?

As far as I know, there are no other books which address prematurity in this way which is why I decided to write the book.

The response has been very positive both from preemie and non-preemie parents and children. The book has been read to classes of pre-school and primary school children where it has been well received. In the schools, it was read over a two week period as a serial read, during which time children also drew and made models of their favorite spaceships from the book.

The length of the book was something I thought long and hard about! Initially, I planned to write four short, 32 page picture books of around 1000 words. I changed my mind when I decided that the first book should focus on social considerations concerning self-esteem and bullying. These issues usually become relevant when children reach a certain stage of self awareness which is commonly around early primary school years. Because children (and especially preemies) vary in their reading levels and attention spans, I decided to extend the length of the book but divide it into short chapters in order to cater to the widest possible age range. I also put color pictures on every page to aid understanding and interest for less experienced readers.

Will there be more Preemie the Explorer books? Do you have any plans to create other preemie characters?

I plan two more books for “Preemie the Explorer.” Book two, “Preemie’s Return to Mama,” will cover the little rocket’s journey back to “Mama Spacecraft” on Earth where he was built. I have book three sketched out also but I can’t hint at the storyline without giving away the ending of book two! There will be a few new characters but Preemie is still our hero. Preemie’s website www.preemietheexplorer.com has more information as well as a ‘meet the characters’ page which allows children to select individual characters and read their brief profiles.

Preemie the Explorer is available on Amazon.