A Recap of Our Chicago Micro-Tinis Event

Ever wonder what a Graham’s Foundation fundraiser is really like? While there’s no one perfect descriptor, on August 18 our fundraising event was as stylish as it was emotionally engaging. That was the night of our Chicago Micro-Tinis for Micro-Preemies event at the chic Hotel Palomar, with sponsorship from Tito’s Handmade Vodka, PricewaterhouseCoopers LLP, and CA Technologies.

The fun and trendy setting (plus the great food and signature micro-tinis) was only one small part of what made the evening so fabulous, however. The real treasure of the evening was the people who took time out of their busy schedules to support Graham’s Foundation and to share their prematurity stories and listen to the prematurity stories of others. Connecting online is great, but as Graham’s Foundation founder Nick Hall said, there’s nothing like meeting face to face. 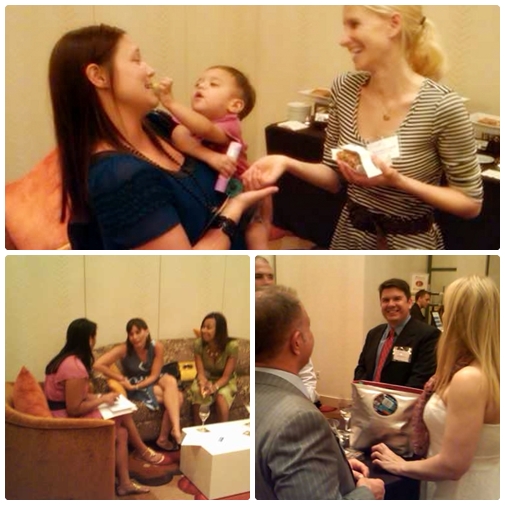 “For me, it was great that we were able to raise several thousand dollars to support our continued efforts to provide care packages for parents of micro-preemie babies,” said Hall, “but more importantly the opportunity to connect and support parents that are right in the middle of dealing with the roller coaster of the NICU and being able to comfort them was incredibly gratifying.”
Among the variety of new and continued supporters who attended our Chicago event, we were honored to have “seasoned” micro-preemies parents such as Graham’s Foundation Director of Events Juliette Caldwell and her husband, Chris, and 19-month-old micro-preemie son, Landon, as well as David and Sonya Agnew, who recently came home with their daughter, Paisley.

We were also fortunate to have new micro-preemie parents LT and Patty Almond as our special guests for the evening. Their son Michael was born on July 22, and is currently in the NICU at Children’s Memorial Hospital.

“We were really glad that our first public outing after the birth of our son was the fundraiser,” said Patty Almond. “Yes, it was hard but talking to Nick and the other parens of micro-preemies was so helpful. There are things they said that I think about every day.”

A surprising common thread linked the micro-preemie parents in attendance was that all had experienced the loss of a twin and had to undergo the challenge of mourning the loss of one child while keeping their hopes up for the other.

“Like so many parents that become aware of Graham’s Foundation, we have been through a heartbreaking and exhausting experience surrounding the premature birth of our twins, said David Agnew. “Our twins were born at 24 weeks and we lost our son James only 48 hours after his birth. We were obviously devastated by the loss but had no time to mourn properly as our daughter Paisley was just beginning her 5 month journey in the NICU at Northwestern in Chicago. We received the Graham’s Foundation package along the way and it brought comfort to us by knowing that we were not alone.

“At the Chicago event, we had the pleasure of meeting Nick, who has courageously taken on this cause to help NICU parents in honor of his son. We also met other parents who had been in similar situations. Once again, Graham’s Foundation provided comfort for us as well as an outlet to talk freely with other people about the loss of our son and our unique experience being ‘NICU parents’.”

And it’s that unique experience that makes Graham’s Foundation fundraisers like the Chicago Micro-Tini event so extraordinary. As noted above, whether you’re the parent of an extremely premature baby yourself or simply supportive of Graham’s Foundation’s mission, there’s nothing quite like meeting the parents of micro-preemies face to face.

“This event was extra special to me not only because this was my first time at a Graham’s Foundation event, but we were surrounded by old friends that have supported us through our journey and new friends that are in their own journey or are deeply connected to helping families of micro-preemies,” said Caldwell. “Having parents in different stages of their journey connecting with each other is what Graham’s Foundation is all about.”

Interested in attending one of our upcoming fundraising events? Check out our Fundraisers page for more information about future fundraisers!