Saran’s Story, Pt. I: A Difficult Path to Pregnancy

Sometimes prematurity is part of a larger framework of events happening to a family. That was the case in Saran’s story, which is complicated and sometimes difficult to read. But miracles happen, and she has been kind enough to share the long road she walked in her prematurity journey. Note: This will be Pt. I in an ongoing series. Find Pt. II here, Pt. III here, and Pt. IV here.

My family and I are Cambodian refugees who survived the genocidal atrocities committed by Pol Pot and the Khmer Rouge in the mid-70s. We were very fortunate to have made it out alive, while two million Cambodians and eighty percent of my immediate family brutally perished during Pol Pot’s regime. In 1983 we were sponsored by a kind-hearted and generous Samaritan who brought us to Santa Rosa, CA. Thirty years later we still live in beautiful Sonoma County. Though my family was poor, my parents instilled honorable values; family, education, strong work ethic, and contributing to the community that helped us immigrate to the United States.

My husband and I are grade-school sweethearts; we met in 7th grade and married when we were in college. While on the path to completing our educational goals we moved away from our home and our friends, living in Washington and the Sacramento Valley, but always yearned to be closer to our family. After attending Dominican University of California, and obtaining Master’s Degrees in Occupational Therapy in 2008, we reestablished our home in Santa Rosa where our happiest memories were made.

During our scholastic pursuance at Dominican University in San Rafael, my father was diagnosed with thyroid cancer. Kevin and I involved ourselves extensively in his care plan, travelling throughout the Bay Area for doctor’s appointments and the multiple treatments he received. We both worked while in school; balancing school and work, and the duty of caring for my ailing parent. My father continues to battle cancer, and due to the type and aggressiveness of it he is not a candidate for further medical treatment. We have had to turn to alternative medicine in hopes of prolonging his life. While his illness is a constant reminder of the fragility of life, it has reemphasized the meaning and value of family and community.

Several years ago, my husband and I wanted to grow our family and have a baby. We were so excited about the joy and love that a baby would bring to our family, especially our aging parents. Heartbreakingly, during our first pregnancy I was diagnosed with Grave’s Disease and needed radioactive treatment, and I lost our child. We tried again, but I lost my second pregnancy to a miscarriage. Despite the heartache and sadness we felt over our losses, our strong desire and determination to expand our family impelled us to try again. During my third pregnancy, my father-in-law was diagnosed with a rare tonsil cancer.

As Occupational Therapists at a skilled nursing facility, Kevin and I were the ones helping patients, families, and caregivers manage and cope with aging, illness, and disease. Never in a million years did we imagine that we would become the ones needing so much support. A few years of clinical skills and witnessing the pains and struggles of those inflicted by cancer did not prepare us in the slightest bit in caring for our cancer-ridden fathers. And like previous pregnancies, my third one ended in a miscarriage as well.

Despite a myriad of tests and consultations with a genetic counselor, we couldn’t get a definitive answer as to why I kept losing our babies. During my fourth pregnancy, my father-in-law died unexpectedly and suddenly from his cancer though he had been given a clean bill of health just six months prior. He was a wonderful father and a caring physician and his death sent shockwaves throughout our family and the many lives that he had touched. When we thought the worst was over, we lost our fourth baby to another miscarriage and received grave news that my father’s cancer had metastasized to his lungs. Our world had crumbled upon us, and the happiness and hope we once felt slowly faded into oblivion. My husband fell into a deep depression over the loss of our four babies and his father. As torn as I was, into a million pieces, I grieved silently and remained strong for my family.

Then about one year later and unexpectedly, I became pregnant again. This time I was placed on bed rest during my fourth week. Though there was no guarantee/assurance that I would have a positive pregnancy outcome, I was relieved from work and my doctor started me on progesterone therapy and baby aspirin. A team of high-risk doctors closely monitored my pregnancy as I developed complications. During a routine ultrasound, our baby was found to have a single umbilical artery, requiring frequent monitoring. 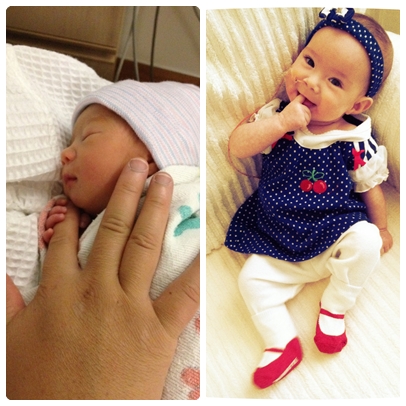