Sometimes prematurity is part of a larger framework of events happening to a family. That was the case in Saran’s story, which is complicated and sometimes difficult to read. But miracles happen, and she has been kind enough to share the long road she walked in her prematurity journey. This is Pt. II – you can find Pt. I here, Pt. III here, and Pt. IV here.

In my second trimester, I began having preterm contractions and my cervix began to shorten. During my 30 week checkup, we were told our baby wasn’t growing properly, with an intrauterine growth restriction (IUGR), and growing at less than the one percentile. Despite our best effort to stay optimistic and positive, my husband and I were terrified of losing another, especially this far along in pregnancy. At 34 weeks, I was induced in a tertiary level hospital, 70 miles away from home as our baby stopped growing.

Within 24 hours our baby girl Elise was born, all naturally in a room that was neither prepared for birthing, nor with a pre-arranged delivery team. It was the most painful and terrifying experience I ever had but hearing the sound of my baby crying brought my husband and I to joyful, relieving tears. Finally our long-awaited baby was here, and she was worth everything that we had painfully endured over the years prior. She was our second chance to life.

After she was born, I received the pathology report of my placenta- I was diagnosed with chronic histiocytic intervillositis (CHI), a condition in which the baby is seen as a foreign object and my body has an immunological reaction to terminate the pregnancy. We were told from my perinatologist that 80-90% of CHI pregnancies end in miscarriage or stillbirth, and babies that are viable may potentially have health problems. Unfortunately, this condition has no cure and the recurrence rate is as high as 90%, which may be the explanation for previous miscarriages. Elise may be the only baby I have, and this fills me with wistfulness and sadness as I often dream of birthing little siblings to grow up beside her; I will always treasure the pleasures and pains of pregnancy and I am so grateful for being blessed with the experience of growing a tiny life inside of me…at least for once in this lifetime.

I will always remember the complex emotions and indescribable gratitude I had when I first saw her. Baby Elise spent her first 3 weeks in the Neonatal Intensive Care Unit (NICU). She had 2 small ventricular septal defects (VSD) and a patent ductus arteriosus (PDA) significant in size. The PDA, which is an open fetal blood vessel that should’ve closed after birth, affects the ability to feed and breathe resulting in slow growth. When, 5 weeks later, it still had not closed, Elise, only a mere 4 lbs, was re-hospitalized in the NICU for intravenous Indocin, a medication that can close the ductus. The treatment was unsuccessful despite our high hopes. Two weeks later, we knew something was wrong when she stopped feeding and experienced greater difficulty breathing.

We took her to the Emergency Room. She was again admitted, this time for acute congestive heart failure (CHF) and failure to thrive, and subsequently required nasal gastric (NG) tube feeding for nearly 2 weeks. On January 11, 2013, at 3 and half months old, a team of UCSF cardiologists attempted to close Elise’s PDA via cardiac catherization. This procedure was unsuccessful, and her doctors intend to attempt another catherization, when she is a hearty 11 pounds, with heart surgery as a back-up plan should she take a turn for the worse.

While she was at UCSF, Elise caught a virus from her little roommate. After being home for 1 week, she was taken to the ER, where she tested positive for pneumonia and respiratory syncytial virus (RSV) resulting in hospitalization. During a follow-up visit with her cardiologist, we found out that Elise had fallen off the chart as her growth significantly slowed down. At just 5 months, and weighing 8.5 lbs, she needed an urgent heart surgery to ligate the PDA at UCSF on March 2, 2013 due to her failure to thrive. Unfortunately, she developed a chylous pleural effusion/ chylothorax as a result of her heart surgery, and subsequently needed another surgery one week later.

However, our struggles continued even after Elise graduated from the NICU and was able to come home with us. Along with the struggles of being parents to a premature baby as first time parents, the mounting medical debt, and financial hardships as a result of losing an income, we were faced with issues related to insurance coverage for Elise’s nutrition. After several baby formula trial-periods later, we had learned Elise has a formula allergy that includes gastroesophageal reflux disease (GERD), and proctocolitis, a mild form of food protein induced enterocolitis (FPIES) that causes bleeding of the lower bowel due to sensitivity to cow’s milk protein. As a result of her medical necessities, she was given a prescription by her pediatrician to the milk bank. 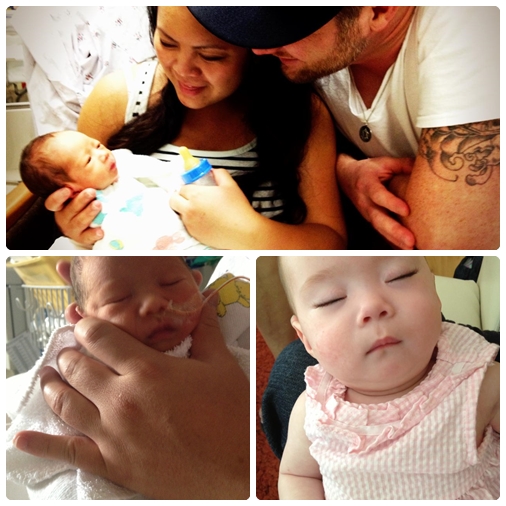