Saran’s Story, Pt. III: The Challenges of Feeding and Growing

Sometimes prematurity brings with it unexpected challenges. That was the case in Saran’s story, which is complicated and sometimes difficult to read. But miracles happen, and she has been kind enough to share the long road she walked in her prematurity journey. This is Pt. III – you can find Pt. I here, Pt. II here, and Pt. IV here.

Nutrition for premature infants is essential for survival, growth, and development. Breast milk provides enormous health benefits and is highly recommended for first 6 months of life. It’s considered the ideal nutrition, especially for premature infants, as it contain antibodies (aka immunoglobins), other proteins and immune cells for protection against bacteria, viruses and cellular debris.

When Elise was born she was bottle-fed with fortified breast milk, to keep caloric intake at its highest for faster weight gain and “catch up”. As a result of Elise’s difficulty in feeding from my breast, I pumped and produced milk for her for 20 weeks. Unfortunately, like other mothers in my situation, I wasn’t producing enough and have since stopped producing all together. This is common among many mothers of premature babies as they are often times ill themselves and making milk is difficult for them, or they start out with a good amount and are so stressed out with the condition of their baby that their milk supply suffers. 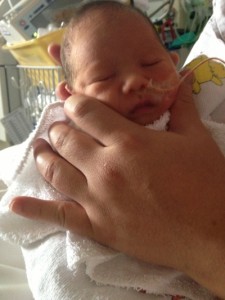 Human Milk Banking Association of North America (HMBANA) Milk Banks are non-profit organizations that provide screened and pasteurized milk to help babies survive and thrive. Ninety-five percent of their recipients are preterm and sick infants in the hospital, however other infants receiving service include: babies who are failing to thrive on formula; has life-threatening diseases or conditions; failing immune systems; from multiple births or adoption, whose mothers aren’t able to provide/produce enough milk of their own; and babies of mothers whose breast milk isn’t suitable for consumption, either because of disease or prescription medications that pass through the milk.

Like blood, breast milk is a bodily fluid and can transmit diseases such as HIV, syphilis and hepatitis, in addition to remnants of alcohol and drugs, as well as bacteria. Milk banks abide by strict guidelines developed by Association of North HMBANA and the Food and Drug Administration (FDA) to ensure donor milk is free of infectious disease and bacterial contamination. Prior to distribution, the milk must undergo processing that includes the multi step screening of the donor, including blood tests, donor tracking, pasteurization, testing and analysis of the milk. Related operational costs include rental of office space, purchase of bottles and caps, freezers, and employee payroll. Volunteers are utilized whenever possible to curb the costs.

Though banks do not charge for the milk itself, recipients are assessed a processing fee to cover the cost for screening, collection, processing, distribution of milk, and related overhead expenses. One ounce can feed a micro preemie in the neonatal intensive care unit (NICU) for a full day, where as a 3 month-old can drink anywhere from 20-40 ounces a day or more. At a steep price of $3-$5.50 an ounce, more than the cost of formula, parents are forced to consider other options such as buying milk online for less than half the price or informal/casual milk sharing.

While insurance companies are much more likely to cover the processing fees when billed through the hospital (e.g milk ordered for NICU brought through the pharmacy), they rarely cover donor milk for outpatients. Milk banks may offer some financial assistance or grant a donation based on necessity and financial criteria, however the banks must prioritize the smallest and the sickest babies due to a huge demand for milk.

In 2012, milk banks across the nation dispensed 2.5 million ounces of milk, an increase from 2.1 million ounces in 2011. While demands keep increasing, the milk banks supply continues to be critically low, largely due to more hospitals are beginning to rely on breast milk as standard of care for premature babies. The slowdown may also be attributed to the increase in informal/casual milk sharing due to the expensive cost for milk through the milk bank. Clearly, the fee for pasteurized donor milk in North America is a barrier to access for some and while HMBANA leaders are working behind the scenes to shape health reform laws so all insurance companies cover this medical expense, there are no immediate resources available to assist with prescription milk coverage.

Despite Elise’s medical need and a prescription to the milk bank, which costs over $2,000/month out of pocket, our insurance will not provide coverage. Though I searched for organizations that could provide financial assistance to cover the cost of milk, I got nowhere. At 6 months old, our baby is now 9.5 lbs and is generally mistaken as a 2 months old. In desperation and as a last resort I have had to turn to complete strangers for the milk donations.

Jessica is our mentor for feeding support.