The Beginning – A Story of Loss and Faith after Premature Birth

Today’s post comes from our preemie parent mentor Jennifer. To connect with her or with another one of our mentors, click here.

After enjoying the 10th birthday of my beautiful niece Kristal, I started to feel some discomfort. I was in the bathroom every 5 minutes. At about 3 am I starting to feel some pain, I remember I told my mom. But, I said in my mind “I’m pregnant so I’m not going to play with pain in my tummy” so I decided to go to the hospital with my dad. We arrived at 4 and in less than 10 minutes I was in the area of Labor and delivery. I laid in bed, they put on the straps and the nurse left for a moment and that’s when the adventure began. “It broke, the water is broke,” I yell to my dad. Just remember that the doctor, who attended to me, said the day that your water breaks is going to be a lot. Then the pain started or rather the famous contractions. OMG that pain … they checked and I was 2 centimeters dilated. They only thing that I was thinking was that I was only 25 weeks pregnant. They began trying to stop the contractions, but the pain was still there. Even with serums, a drug, I was still feeling contractions. Boom!!! They came back and checked and now I was dilated 9 cm. Thank God my mom arrived. I decide to get the famous epidural just thinking if one of my babies doesn’t get in the position they have to do a C-section. They dress Mommy and take me to a room with a window, fast food style. They were two doctors and four nurses plus the ones in the window. The time to push began. I remember every nurse telling me to push like I want to poop and in my mind I was like “hello I don’t want to poop”.

I don’t remember for how much time I pushed him, but at 12:19 Mateo came. I didn’t see him; they passed him through the window very fast. Lucas’ water had not broken yet, so the doctor did it and in one push he came at 12:25. At least I could see him as the belly had dropped something, but as he came they took him away through the window to the NICU (neonatal intensive care unit). I just remember that my mom told me that Mateo had to receive CPR (she saw a little bit through the window). For me what I understood was that he was born dead. As I entered the NICU, I encountered a scene that no mother would like to see but despite everything I did not lose faith. Baby A and B, tucked into incubators, tubing, filled with cables through the nose, mouth, skin, miniature babies, machines everywhere, wrapped in wire, but alive. But regardless of that, I just wanted hold them, kiss them and tell them I was happy to see them. . Wow, it was the most beautiful moment watching his miniature hands gently grabbing my finger. It was great.

During this pregnancy I realized that the love God has for us is so great that we cannot compare with a mother’s love or any other love. Each passing day of my pregnancy I felt the love of God. September 12 was day filled with many emotions. And here is when my NICU Story began.

The firsts week of my NICU story was like the movie Finding Nemo; the beginning was rough and the rest of the movie is filled with of all the emotions. Can you imagine losing your family and then your baby being lost? Poor father. But well, back to my story. Second day of life, blood transfusion and all that stuff. Third day, central line to Mateo. So they sit us down in the tiny waiting room while they were placing the central line and I remember those double doors opening and the nurse coming right to us. She said, “his heart rate dropped, we need you guys inside”, what my mind processed was “ your son is dying they need us inside to say good-bye”. But the God that I know is bigger than anything. When I get inside, all the faces were in shock. I looked at the monitor and saw a high heart rate. Everybody tells me “he’s ok” and they say to each other “he had color again”. In that moment I didn’t understand the color thing that they where talking about. So after that scary moment, Mateo was stable. On days four through eight, Lucas didn’t pee. For all those days they were trying hard to making him pee. There were medicines, catheters, and specialist doctors. Because he still had not urinated, they held a meeting. The room was like a storage room; me, my husband, the Doctor and the nurse who were taking care of Lucas that day gathered there. The Doctor started telling me all of the problems that Lucas had; brain bleeding, kidneys not working, etc., etc., and the proposition came. They game me three choices:

Horrible, horrible, horrible. That was the most difficult decision that I had to make in my 29 years of life. I didn’t choose anything that day, the first choice felt like I was killing my son, the second was the only one that I was a little convincing, and I still don’t know what the third means. So after a conversation with God and asking him for the right decision, we decided for the second option and they said that when his heart rate started to drop they would call me. So now you know where the PTSD with hospital phone calls started. Friday the 20th at 3 am I received the call. I ran to the hospital, literally. And the first thing that I did was look at the monitor. His heart rate was at 77, and the nurse asked me if I wanted to hold him. Hello!!! Of course I wanted to hold my baby. When they put my baby in my arms I looked the monitor and his heart rate was at 125. That day my heart stopped 125 times. For 5 hours I was with him, telling him that I love him and he would be going from my arms to Jesus’ arms. I told him to go in peace and enjoy this time like I was enjoying it. And like I said, five hours later he passed.

This is only the first week in the NICU. After all, my NICU life continued. Walking to the room with Lucas’ empty incubator beside Mateo’s was hard but I had to be there for him. Mateo is the strongest boy that I ever met. Our first kangaroo care was when he was one month old and lasted 45 minutes and the next day they had to put him in the oxilator (high frequency ventilator). He was on this ventilator for 2 months. I spent Thanksgiving Day in the waiting room of the OR because he was in his first laser surgery (he had another one in December). Between codes and blood transfusions, they found out he has pulmonary hypertension. They tried to extubate him a couple of times couldn’t so they had to place the tracheostomy. They surgery was on January 16th (my youngest niece’s birthday). Because his liver was enlarged they had to open his belly, which turned it into a major surgery. The day after surgery he recovered so slowly that they didn’t thing he would make it. Back to central lines, IV’s, Nitric oxide, and 100% oxygen.

But like I mentioned before, the God that I serve is bigger than any thing in this world. I was praying every day; I was reading the Bible to him every day. I believe in God and His Power. I took things day by day. There where rough days, but I always said to God “If you chose me, you will give me the strength that I need”. I remember he started having blue spells while on 100% O2, and when he was having this spells I thought that he didn’t have much further to go. I went home (to the Ronald McDonald house) and prayed that night that he would be on 70% O2 the next day. I will tell you keep praying because when I arrived at his room he was on 78% O2. Praise the Lord! So that’s been my life. He started to become more stable and they tried to put him on a home vent, but he failed. Mateo was the only 9-pound trached baby in the NICU, so we started to think about putting him in the PICU.

We had the first meeting and I remember this Doctor asking me what my expectations were for my son, a question to which every person should know the answer. My reply was “get better and go home.” His response, which will never leave my mind, was “ I just want you to know that I don’t have magic for your son”. Excuse me, Sir, but the God that I believe in doesn’t use magic. Anyway, two months later I went to the PICU. After spending 11 months in the NICU, I had created a family there. I spent two weeks in the PICU because coded while on a home vent trial. 5 days after that code I was transferred to the Children’s Hospital of Philadelphia (CHOP). I got there on Friday. Sunday he was in the OR for a stent placement and a biopsy. I celebrated his first birthday in the PICU with my husband and nurses and a couple of new friends that I met along the way. They moved us to the PCU (progressive care unit) to start the process of training to be able to go home. On November 19th, two months of training later, we went home.

After 432 days total, we went home on a vent that he could tolerate. You think that when you go home everything will change, but I can tell you that not much has changed. You worry more but you feel happy at the same time. I would have never known that with all the training that I received I would have to use the CPR on my son a month after discharge. A mucus plug formed in his trach, but when the paramedics arrived, he had already recovered and was going back to normal. We spent a couple of days in the hospital after this, but my son was fine. Halleluiah. We had a couple of more hospital visits after this, and so we created our own routine for coming and going. 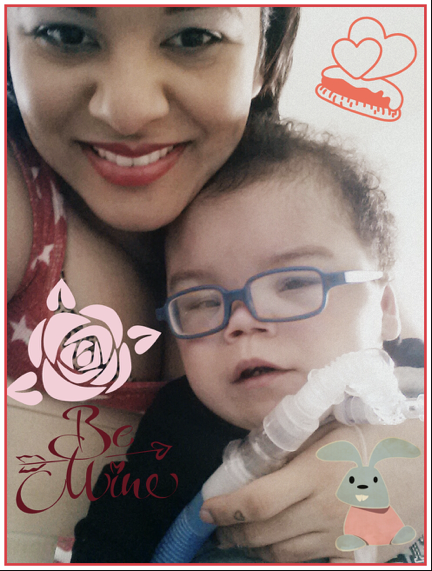 Even though I have a 19-month-old baby that doesn’t crawl, talk, walk, or sit, I feel more than blessed than ever. So my son has a life support machine, tubes and limitations. Who calls these things limitations? I feel more than blessed to have him in my life, to show me the love of God every single day. Mom and Dad, don’t give up even if the path looks different and rough. God is still the same God who divides a whole ocean. He’s the one who came back to life to save you and show you how great He is. Sometimes we have to sacrifice for our kids, but to see them grow and smile at you makes you stronger every day.

With all my heart,