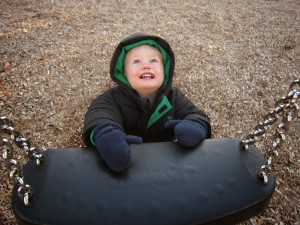 My 32-week preemie is now a full-fledged toddler, walking about and getting into mischief. He throws all the books from their shelves, dumps the toys from their buckets, and has a habit of running away with freshly folded laundry. He does a lot of the typical toddler things, but he stands out among his peers.

At 20 months, he is often quiet and does not have many words. He does use the word “done” and he just learned “uh-oh” yesterday and has already had several opportunities to use it. A typically developing 20-month-old should be able to say about a dozen words and some will even start pairing words together into simple sentences like, “Carry me.” We are far from that.

A few days ago, we met up with a friend who has a daughter born within two weeks of my son. Granted, she was full term and my son showed up two months early, but she looked like a giant compared to my son. She saw the frog pattern on a baby blanket I had packed and she said, “frahhh.” Her mom asked her what the frog said and she replied, “ribbet, ribbet.” My son and I stared in awe.

Every once in awhile, someone will notice that he is quiet and try to empathize with me: “My daughter didn’t say a word until she was three, and now I can’t get her to be quiet.” I do think there is a good chance that my little preemie will be fine and that someday he will be able to tell me exactly what he wants for breakfast rather than the guessing game we play now. But I won’t leave his development to chance – especially when there are free services like Early Intervention.

Starting life in the NICU environment taught me to be an outspoken advocate for my baby. I remember watching his chest rise and fall as he laid in the isolette, always knowing that it was going to go up and down again but watching intently just the same. I feel that same hope and vigilance now: when he spouts out a word or shows me a sign, I will be there. And until then, I will be there watching and coaxing and waiting.