The value of donor milk 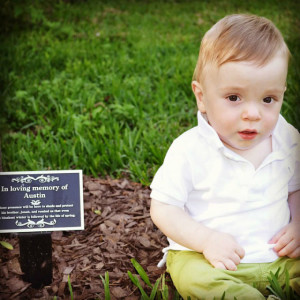 Today’s guest author, Morgan, can be followed on her personal site.

I unexpectedly found myself the mother of identical twin boys at 24 weeks gestation in the early morning hours of Valentine’s Day 2014. To say I was unprepared is an understatement. Jonah and Austin were born after my water broke 36 hours before – one evening after work. Jonah weighed 1 pound, 9 ounces and Austin was 1 pound, 10 ounces. To me, they were perfect. Austin was with us for eight incredible weeks before we lost him due to a host of complications due to prematurity –  most notably a bacterial meningitis infection in conjunction with a bilateral Grade IV IVH (intraventricular hemorrhage) that led to PVL (perventricular leukomalacia). That’s a lot of acronyms but any parent who has spent time in the NICU quickly learns what they need to know.

Jonah came home after 160 days in the NICU. He spent a majority of his time on a ventilator to help him breathe. When he finally came home with us, he was on oxygen and had an NG (nasogastric) tube…but he was home!  He is now an energetic, wild, one year (adjusted) little boy. One of the major things we credit Jonah’s success and health to is breast milk. Not only is it the best medicine for a preemie but also it was the one thing I could provide Jonah and Austin when it seemed like every other part of my body failed them. 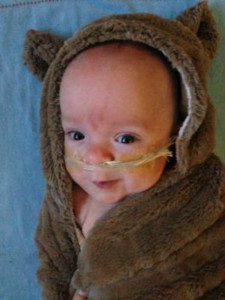 When you have a preemie in the NICU, there are three little letters that no one dares to say out loud…NEC.  Those three letters haunted my husband and I for months (it was not until Jonah hit 34 weeks that we breathed a small sigh of relief). NEC stands for Necrotizing Enterocolitis, which is an intestinal disease that severely affects the bowels of premature infants. The fatality rate for NEC can be as high as 50% and it can happen so fast there is little time to intervene. The first question we asked the nurses most days was if the boys had pooped.  Poop meant their intestines were processing milk and working. Austin had a little brush with NEC and a surgery that required inserting a drain to help relieve his stomach of fluid build-up. I say a brush with NEC because Austin was lucky…the obstruction in his bowel was caught early and closely monitored so that he was able to overcome it without any long-term issues.

Breast milk is the best and really only way to help prevent NEC. It is medicine to these little guys. I had an emergency c-section at 24 weeks gestation and had no idea if breast milk was going to be in my future.  Immediately after the chaos of an emergency C-section, you tend not to think about producing milk. However, I had an amazing delivery nurse and best friend who helped remind me how important it was to begin pumping within an hour of delivery. It was the only thing I could do for my boys and I was determined to try it. As most moms know, it was slow going at first. The NICU nurses were amazing and encouraged me to save each drop in a small syringe. My husband would dutifully deliver that syringe to the nurses who would dab a little taste on the boys’ lips.

On day two when I couldn’t produce enough to give to Jonah, I signed a release for donor milk and was so grateful that donor milk was available – even if it was only needed for a short time. I pumped every two hours around the clock for almost two months (at that point, I started allowing myself a little more sleep). I had two babies I needed to produce milk for and I was determined. I think I spent more time in the milk bank than at the bedside some times. Anyone who spent time with me those nine months knows I was attached to my pump. I became the master of pumping in odd locations and could tell you some pretty embarrassing stories. 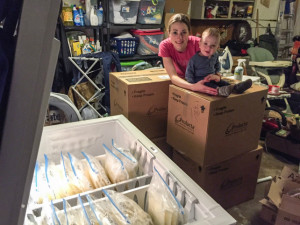 I was never able to actually breastfeed Jonah. He was on a ventilator until his due date and then had a feeding tube until he was nine month old. The wonderful lactation consultants helped in trying to get him to latch a few times but feeding was, and still can be, an obstacle for him.

I have absolutely no idea how my body did it but I produced more than enough milk for the little guys and started filling up our allotted space at the milk bank. At that point, a family member bought us a deep freezer and that quickly became full – as did our kitchen freezer and garage freezer. I decided to stop hoarding my milk and share the love and become a breast milk donor. I have more milk than I can keep track of but a quick calculation showed that I have donated a few thousand ounces of milk.

This week, I sent off my last donation of milk and it was very bittersweet. My milk gets sent to Prolacta    Bioscience in California where it is processed, pasteurized, and sent back to Texas Children’s Hospital where my boys were born. Some of the milk gets turned into a human-milk “cream” – this essentially skims the fat off the breast milk and packs a lot of calories in a small amount of liquid. This is important for babies like Jonah that were fluid restricted because of their impaired lungs. Jonah was lucky to take part in the clinical trial for the Prolacta cream and was even featured in the local paper. (You can read the story here:  http://www.houstonchronicle.com/news/health/article/Tiny-preemies-thrive-with-cream-supplement-study-5690083.php)

My husband and I are so grateful for everything that helped save Jonah’s life and give Austin a chance. The boys received more blood transfusions than I can count and when I gain a little more weight, I will be the first one in line to donate blood. As much as we wanted to, we were unable to donate Austin’s organs because of his infection. Breast milk is something I could give back. For nine months I put my heart and soul into every drop and I am so grateful that it was something I could give to others. I write this partly as a pat on the back to myself. More importantly, I write this to inform others of the benefits of milk donation (or any donation for that matter). I also write it to thank the other moms who donated milk and helped save my child and the children I spent six months watching in the NICU!