To the Expectant Mother Spending Her Holiday in a Hospital Bed

I arose from a refreshing afternoon siesta with a knock on the door. As I lifted my head from the luxury overfilled hotel pillows, my eye was caught by the graceful landing of a majestic seagull on the balcony ledge overlooking the beachfront. I pulled back the white Belgian linen duvet cover to make space on my lap for the banana pudding I had ordered and was about to indulge in with abandon. There were no limits on this vacation- besides, I was eating for two – or does it count for three with twins? What a lavish way to spend this holiday as an expectant mother. I couldn’t be more in bliss.

Except that wasn’t quite how things really went. In reality, the knock came from food service. And what the cafeteria menu listed as “banana pudding” was really more like a serving of Jell-O brand instant vanilla pudding mix sans bananas and wafers. And my beachfront balcony view was actually a ledge outside the window blocking the sight of some construction project down below. Yes, it was still a holiday. And I was still doubly blessed in pregnancy. But I was not celebrating through an indulgent pampering baby moon. Instead, I was spending my holiday in a hospital.

I originally started writing this reflection on Day 13 of pregnancy hospital bedrest, 10 days after my water broke, and 7 days before my twins were born via emergency C-section at 28 weeks. I am sharing it to encourage other mothers whose pregnancies aren’t going as planned and who may be filled with uncertainty about their upcoming delivery and prognosis of their unborn child(ren). I am especially reaching out to those expectant mothers who won’t be celebrating the upcoming holidays surrounded by family and friends in the comfort of a home or restaurant; but instead will be inside four white walls hooked to an IV in their arm.

As you can imagine, being in a hospital was not where I had initially desired or planned to be. As a first-time mother, there were a million other ways I originally could have envisioned myself preparing for the upcoming arrival of my two little ones. I could have been out shopping for coordinating Koala Baby outfits at Babies R Us, so my eyes could gleam over how adorable my babies will look. Or I could have been at home choosing an aesthetically appealing arrangement for my babies’ nursery; carefully picking out colors psychology has pre-determined to impact the amount of crying and sleep a baby does and scrutinizing over the minutiae of interior design to get the perfect image to flaunt on social media. Or I could have been mid-pose, suspended in elegance, while the beauty of my shape and pregnancy glow were being illuminated in meticulously captured maternity photos to create a gorgeous keepsake to cherish from this time of enchanted anticipation.

(the only available background option being a hospital mirror selfie didn’t quite match the caliber of the scenic backdrop from my imagined maternity photoshoot…and due to ongoing HG (Hyperemesis Gravidarum aka severe morning sickness- or in my case all day sickness) and the PPROM (Preterm Premature Rupture of Membranes aka water breaking), I didn’t make it far enough in my pregnancy to sport a round belly ready to bust at the seams, and what small roundness I did have deflated into more of an actually bumpy bump). 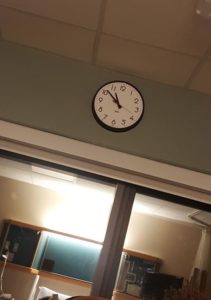 Instead, my holiday celebration turned into staring at the skinny second hand circle the clock one more time. Counting how long the sunlight filled the room when a cloud let the brightness through. Catching snippets of muffled conversation outside my door and trying to picture in my head what the person whose voice I could hear looked like. It meant waiting. Lots of waiting. And, as excruciatingly boring at it was, hoping and longing for more waiting. Because it was no longer about me, my wants, or my comfort. It was about making sure that the little two-pound people inside me got more time to practice breathing and regulating their own body temperature. It was about getting through another 24 hours, because my high-risk doctor told me that each day added 3% to my babies’ chances for survival. It was about helping them put on body fat and develop their immune systems. It was about doing what they need. And not what they need so I can throw it back in their faces when they’re older about how much I went through for them and how grateful they should be. Doing what they need so they have a fighting chance at life. Doing what they need so they can come out of me and properly experience everything that is good and beautiful in the world. Doing what they need so when they bring me smeared handprints on a ripped piece of construction paper and say, “Happy Holidays!”, that paper is worth more than anything they possibly could’ve bought at the store because those little hands are attached to little pieces of my soul.

So, that holiday, I looked forward to watching the second hand go around the clock again. Getting woken up in the middle of the night to have my blood drawn. Having my stomach pushed in and strapped down too tightly during a fetal nonstress test (NST) by a younger nurse who has less experience than some of the others. Not because any of those things were remotely enjoyable, but because nothing else was more important to me at that time than my little miracles