Our Preemie Parent Concierge, Heather, helps parents every day deal with the stress and anxiety of the NICU, but she handles this issues with grace and ease, because she’s also been there. Here is Heather’s story of prematurity and information that you can share on two common preemie “issues” – IVH and ROP that were part of her son Owen’s preemie journey. 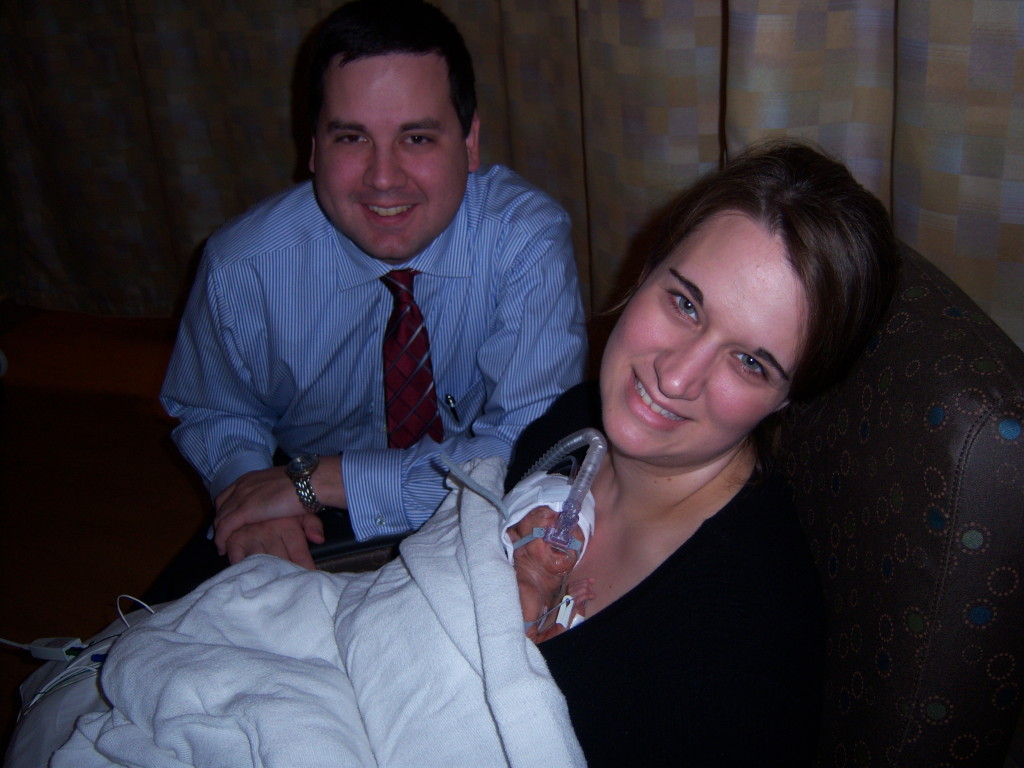 My life as a mother began 25 weeks 5 days into my pregnancy. Everything had been textbook up until that evening. I had exercised, I ate healthy, and I never missed a doctors appointment. Owen was our first baby and his traumatic entrance into the world was something that neither myself, my husband nor our friends and family had ever experienced before. He was a tiny 2 lbs 1 oz and 15 inches long. I went into labor in the middle of the night and he was born via emergency caesarian section on May 3rd, 2010, just a few hours after my first pain. I’m not sure whether he cried or not when he was born. My husband was waiting in the hall with a nurse when they told him that he had become a father. In the chaos, the staff forgot to mention the gender of our baby, which we were waiting to find out. That day began a journey for which neither of us was prepared.

My son is a beautiful little fighter. His 75 day NICU stay was filled with ups and downs. He experienced many common issues that micropreemies face, but two of our greatest challenges were Intraventricular Hemorrhage (IVH) and Retinopathy of Prematurity. 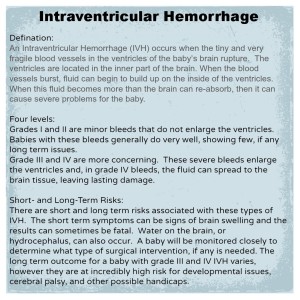 My son had three head ultrasounds during his first week of life. The first was on Day 1 and the results were encouraging. His brain was healthy and clear of hemorrhage. On day 3, the results were less optimistic. He was diagnosed with a grade I bleed on the left side and a grade II on his right. We were concerned but the doctor reassured us that these were very minor and the outcome of these bleeds is usually nothing to worry about. On Day 7, the ultrasound showed a grade III on the left and a grade IV on the right. My world stopped. I had done my homework over those previous days. I knew how bad that was. The grade III bleed would eventually spread slightly into his brain tissue, increasing the severity to a grade IV on both sides. The doctors were realistic with us and made us very aware of the possible disabilities that our son may have. Outcomes such as cerebral palsy, global developmental delays and permanent mental handicap were all discussed. We were told that we would not know for a couple of years how his IVH had impacted him. Thankfully, his bleeds resolved without the aid of surgical intervention and hydrocephalus was avoided.

We took our baby home not knowing what his life may look like. I did my research and made sure that my son was involved in any type of program that could help him. We connected with Early Intervention and the NICU Follow Up Clinic to monitor his development. Months passed and, while he took his time, he reached every milestone. I would spend my days playing with him. He learned very well through play. And I would talk. I have always been a bit of a talker but I took my one sided conversation with my baby to a whole new level. His brain needed time to rest of course, but he also needed the right kind of stimulation. My voice had always been a comfort and we were told by our doctors that my talking would help build connections in his brain. We talked about unloading the dishwasher, folding the laundry, dusting the living room, and anything else that popped into my head.

The first year was isolating. We had just moved to a new state and we were on lockdown to protect my son’s fragile lungs from illness. I cherish that year together. It was hard and lonely at times. But he was home, healthy and I was able to make up for the time I had lost while he was in the NICU. By the time he was 2, he had caught up to his actual age and he graduated from all forms of follow up. He is now 30 months old and learning his letters, numbers, shapes and colors easily. He is our miracle.

When we were in the NICU, I had very little hope that my baby would ever be OK. Our doctors were honest with us and I had heard very few stories containing positive outcomes of preemies with severe IVH. Even now, our son amazes his doctors. The brain is a very pliable organ. The boy in front of them is the opposite of what they expect when they look at his last ultrasound. Our early intervention visits were never more than the occasional check with a physical therapist as he was usually around his adjusted age. Considering the bleeds that he had, the statistics were against him. 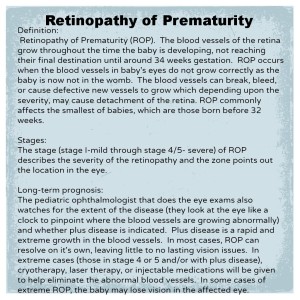 My son was diagnosed with ROP during his second eye exam. Thankfully, it was mild and never progressed beyond the Stage II of the disease. Regardless, he was monitored very closely in the NICU to ensure that it wasn’t worsening and that no treatments would need to occur. The eye exams were more difficult for me than my baby. Our pediatric ophthalmologists were amazing. They were fast and Owen barely noticed the exam in the NICU. It was getting the eye drops that were rough on him.

When we brought him home, we were instructed to follow up with a retinal ophthalmologist to ensure that his eyes continued to heal. The specialist in our new area was not a pediatric doctor and the exams were so difficult to watch. The wait was always long and I was terri
fied of bringing my brand new 4 lb 13 oz baby into a doctors office. Each trip usually lasted at least an hour and a half. I had to hold him in a swaddle on my stomach as the doctor did his exam. Unlike in the NICU, they used a little contraption (speculum) to hold his ey
e open. It was very traumatic for both of us. After several visits his eyes began to improve and we were discharged to a pediatric ophthalmologist who still follows my son today. Now, at two and a half, Owen will have a surgery to correct
an eye turn. It’s unclear as to whether his ROP and prematurity played a large role in him developing the turn or whether it was genetics as I was born with one myself. His vision is fine and we were thankful that his retinopathy never progressed farther. In general, his ophthalmologist is the only specialist that my baby has needed to follow up with yearly.

My little man has come very far since May 3rd, 2010. I am thankful each time I look at him. I am in awe of every milestone he reaches, every word, number, letter, and color he learns. He has surpassed every expectation our doctors had. He is a spunky fighter and an
amazing miracle. 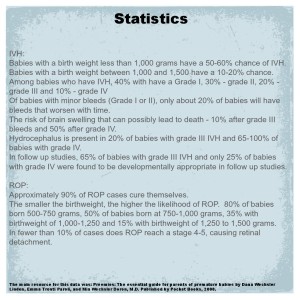 About The Author: Heather McKinnis