Working while in the NICU 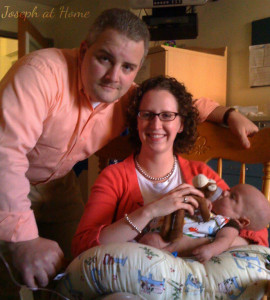 Finding out we were expecting fraternal twins was a huge surprise. At the time, I was team teaching middle school and high chorus with my husband, Scott. Our boys were due in the middle of February – one of the busiest times in our school year with performances of the upper school musical and performance evaluation for all choirs. Expecting twins, my doctor had told me to expect them five or six weeks early. I wanted to teach until the very last day possible in order to save my sick days to use after the boys were home.

Scott and I made every plan possible. If the boys come around this time, this will be the plan. If the boys come around that time, that will be the plan. We had a substitute lined up to begin after Christmas in case I couldn’t return to teaching after the holiday. We had plans for the musical. We had plans for performance evaluation. It was all worked out (Scott and I are huge planners).

What we didn’t plan for was the birth of our twin boys at 24 weeks gestation. Even the best laid plans would not have prepared us. I can remember some of my thoughts in the hours after they were born had to do with what would we do about school. Would Scott go back? Would I go back? Would we both go back? I had no idea. I knew there was no way we could afford for me to stay out of work until they came home and beyond but I also knew I would feel incredibly guilty going back to work.

Fortunately, the substitute was able to start immediately after their birth and kept our class running. Scott and I took the two weeks after the boys were born off from school. Our son, Campbell, was transferred to a surgical hospital during this time while Joseph remained at the birth hospital. We were getting calls in the middle of the night from Neonatologists at both hospitals. We were back and forth to the hospitals constantly. We were exhausted. I had an emergency c-section and ended up with a secondary infection in large part to the stress and having to be on the go to see our boys.

Much to the chagrin of several of our colleagues, we made the decision to return to work after two weeks. People thought we were crazy. We needed some semblance of a routine in our life. We needed some sense of normalcy when our life was anything but normal. In the early days of our NICU stay, we were not the type of people who could sit at the hospital for hours on end. In fact, Joseph didn’t do well when we were in his room. If he heard our voices, his heart rate sky rocketed. We would teach all day, make the trek to one hospital and visit, make the trek to the second hospital while stopping to eat dinner on the way, visit until late into the night, and go home and crash. I found myself sleeping better when we made ourselves have some sort of routine.

Our son Campbell passed away the Sunday before Thanksgiving after 23 days of life. Again, our colleagues thought we were crazy when we returned to work after a week. We needed normalcy. Sitting at home drove me crazy. Scott and I love teaching chorus and being at school teaching was something positive for us when it seemed like life around us was falling apart at times with the death of Campbell and Joseph continuing to be very sick in the NICU. After Campbell died, we continued our same routine. We would travel to the hospital as soon as school was over. We would stay with Joseph until shift change, leave for dinner, and come back to the hospital for a few hours. By this point, we were able to participate in Joseph’s care more frequently and were able to hold him almost every visit. His heart rate didn’t sky rocket anymore when we visited.

We settled into this routine. It was what worked for us. Our families didn’t make us feel guilty for working – they got it. The nurses and doctors didn’t make us feel guilty for working – they knew we had to do what was best for us. They also know the financial hardships placed on families who have a child in the NICU. Some of our colleagues were often the ones who made us (or tried to make us) feel guilty. They thought we were crazy for working. When you have a family member in the ICU, you are supposed to sit at the hospital 24 hours a day, right? They didn’t understand NICU life. It’s different.

Joseph and Campbell were due in February. As his due date approached, we started making plans for what we would do when he came home. How would we handle a substitute? How long would I stay home? How long would Scott stay home? Due to health complications that extended his hospital stay and included a transfer to a different surgical hospital in town, Joseph was first scheduled to come home in April after his due date. We made plans for him to attend a medically fragile daycare after a couple of weeks of my staying home with him. (I had planned to use the sick days I saved by working).

Two days before scheduled discharge, Joseph developed a rare case of late onset Necrotizing Enterocolitis (NEC) and he ultimately did not come home until June – after school was out for summer. We had to use several sick days in the days after Joseph developed NEC as he had several surgeries to remove 2/3 of his small intestine, place a central line, and reconnect his small intestine. I was incredibly thankful we had saved the sick days so that we did not have to take leave without pay.

You are the parent and you are doing everything in your absolute power to take care of yourself, your family, and your baby. Do not let anyone make you feel guilty for making the decision that is best for you. You know what is best.