Your Best Will Always Be the Best for Them

You hear a lot about breastfeeding, but not often abut how hard it is. We are led to believe that it is easy because it is the natural way. It shouldn’t require any effort. But the test results have determined that is a lie.  This is even more true when it comes to preemies and babies in the NICU.

I’ll be honest, when I found out I was having twins I got super excited about the idea of tandem feeding and breastfeeding in general.  I can’t tell you why, as it was never a priority with my oldest and I only nursed my middle for 6 weeks. Maybe I was hoping for some sort of come back. Who doesn’t love a good comeback, right?

When the twins decided they wanted to join the world 15 weeks early, my idea of nursing them instantly changed.  Out went the images of bonding and nursing them right after birth and in came my new partner, the breast pump. Over the next few months I would spend more time with her than my own husband. 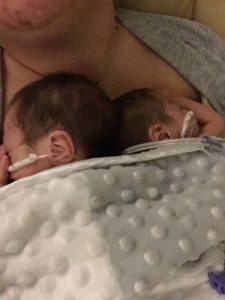 Our relationship started shortly after the twins were born, before I even got to fully see them.  They needed the colostrum. I needed to get that for them. From that point on we had a standing date every 2 hours around the clock.  At first, it was easy. It wasn’t comfortable but it was easy. My babies needed me to do it and it was the only thing left I could do for them.

Once I was discharged, it became a little more challenging. We lived 35 minutes from our NICU and, as I mentioned, I had two older kids at home; one in preschool and one in first grade.  I made the drive to the NICU everyday after school drop off and back home every afternoon before the bell rang.  I tried to time everything so it would work out just right. Since they were not yet getting feeds, we were able to freeze everything I was getting and, even then, it wasn’t much.

After about a week or two, the joy was wearing off. My supply was not increasing like I wanted it to. My alarm clock was waking me up every few hours at night, not my newborns cry. But I kept telling myself they needed it. It was the best. I carried on.

I never had a very strong supply.  I did everything they said to do in the beginning, but it never came on strong.  I knew women who could pump gallons at a time it seemed and I was lucky if I got an ounce or two.  I tried almost every trick out there. Everything from power pumping to blue sports drinks and anything else Pinterest suggested. I also tried herbals like fenugreek, which no one tells you has the opposite effect on some women, and it made me smell like maple syrup.  The only thing that seemed to maybe help a little was skin to skin but that wasn’t possible every time. It’s one of those built-in struggles of the NICU, having to wait for someone else to come help you hold your baby.

Once they got old enough, we started to let them go to breast.  My son was a champ. He loved food and enjoyed anyway he needed to get it.  But he had a lot of trouble still remembering to suck, swallow and breathe. He would often drop his heart rate, which was terrifying, and we decided at that point that he wasn’t quite ready. My daughter, on the other hand, never really figured out the latch.  She was still pretty small and had a hard time. It was frustrating for both me and her. I decided I was just going to exclusively pump.

After a few more weeks, we brought my daughter home and life became even more chaotic.  Now I had the older two in school, one baby with a lot of appointments and one baby still in the NICU.  I started to push the old breast pump to the side which impacted my already slim supply.

My son was discharged a week later and we were finally complete. I thought I would be able to fix my supply. Maybe even try putting them to breast again, now that we were home and everyone was comfortable, but it didn’t happen that way.  I was not making enough for one baby all day, let alone two. The less milk I made, the more stressed I became, which just resulted in even less milk.

When the babies were 6 weeks adjusted, I gave my pump the good old “its not you, its me” and we called it quits.  My frozen supply was long gone and, just like that, it was over. I’m sure some would say that I could have tried harder.  I, of course, let myself down. This was going to be my comeback. But did I let my kids down? I don’t think so.  It has taken me two years to get to that conclusion. I put blood, maybe some sweat, and a whole lot of tears into those 4.5 months and that is something to be proud of.  I gave my babies what I thought was best and, in the end, it was a happy mama. I think something to remember is that your best is always going to be the best for them.